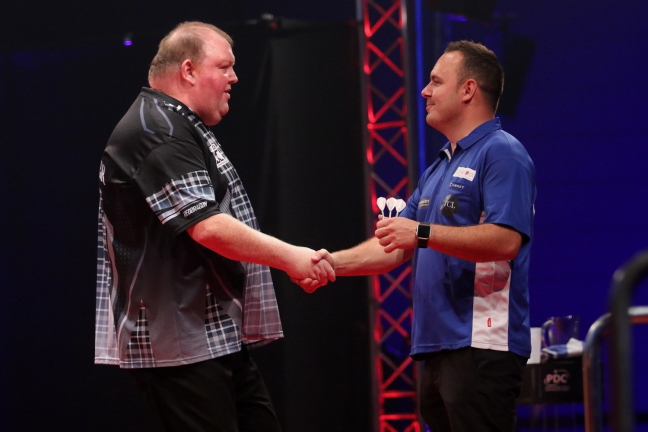 John Henderson has replaced Max Hopp in the current line-up for the European Championship next month, as nine spots are still to be decided heading into the final European Tour event of the season.

The Scot beat Brett Claydon 6-4 in the first round of the International Darts Open, in Riesa, on Friday, before losing 6-1 to eventual runner-up Rob Cross in the last 32 on Saturday.

Friday’s win was enough to move Henderson into the 32nd and final qualifying place for the European Championship, with Germany’s Hopp falling out, with one more event left to go before the cut-off.

The Gibraltar Darts Trophy, the 13th and final event on this year’s European Tour, takes place on September 27-29, with the UK and European Qualifiers for the tournament to be held this Friday.

Gerwyn Price won his second European Tour title last night, beating Cross 8-6 in the final to retain the International Darts Open. The £25,000 prize for winning the title moves him up from eighth to third on the European Tour Order of Merit.

Cross remains in 10th spot, while beaten semi-finalists Peter Wright (seventh to sixth) and Glen Durrant (22nd to 17th) have both moved up the table.

Gerwyn Price's second title in Riesa in as many years sees him jump to #3 on the Euro Tour Order of Merit after 12 of 13 events. 23 of 32 spots have been secured heading to Gibraltar in a fortnight's time. John Henderson holding onto the last provisional spot. pic.twitter.com/X5IlZwgDwV