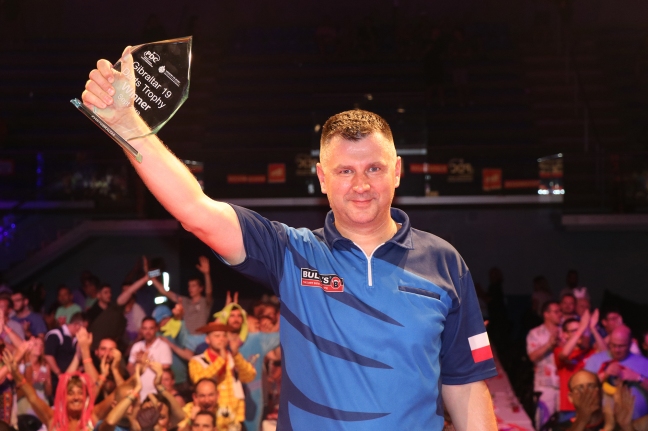 The final darts thrown in the third quarter of 2019 were probably not by the player you most expected, but it is becoming increasingly harder to underestimate Krzysztof Ratajski.

Poland’s number one added his name to the list of winners on the PDC European Tour in Gibraltar last night. An 8-2 win against Dave Chisnall in the Gibraltar Darts Trophy final saw Ratajski become the tour’s 28th different winner, but the first from Poland.

The introduction of the PDC’s Development Tour and, more recently, the Junior Darts Corporation, should lend itself to a clearer pathway for young players to emerge and breakthrough, but Ratajski, who turns 43 in January, has had a route which has not been straight forward.

According to Wikipedia, Ratajski has been playing darts since 1997, a 20-plus year run which over the last two years has only now really started to see him reap the rewards of his ability.

As Friday’s first round games took place in Gibraltar, the date, September 27, also marked the two-year anniversary of Ratajski’s greatest triumph, that World Masters victory in Bridlington in 2017.

It was on that day, September 27, 2017, that Ratajski properly announced himself on the world stage. A 4-2 win against Glen Durrant in the quarter-finals, followed by 5-1 and 6-1 wins over Cameron Menzies and Mark McGeeney, landed the Pole the £25,000 top prize. His three averages across the final day, 100, 98 and 97, ear-marked Ratajski as one to watch out for.

Despite that first major title success, Ratajski’s rise took a bump in the road a few months later. January 2018, Q-School, and he missed out on a PDC tour card. A few weeks later, though, he showed his mettle, winning the last of the six UK Open Qualifiers, his first PDC ranking title, and still without a tour card, went on to win two Players Championship events on the same weekend in October last year.

Those floor titles ensured Ratajski a place in the Grand Slam, Players Championship Finals and PDC World Championship. Runs to the last 16 in both Wolverhampton and Minehead, which included that memorable comeback win from 5-1 down to beat Gerwyn Price 6-5, highlighted his name once again.

While his World Championship campaign ended at the first hurdle against Seigo Asada, Ratajski had finished the season inside the top 64, to avoid a return trip to Q-School, and he started 2019 with a tour card.

Two more Players Championship titles followed in June and August, but the expected next step, of a first European Tour title, continued to elude him. In fact, before this past weekend, Ratajski had featured in eight European Tour events this season and only reached one quarter-final.

However, Gibraltar, and the 13th and final European Tour event of 2019, would be where Ratajski’s next breakthrough would materialise. Locked at 3-3 in his first game of the weekend, against Steve Beaton on Saturday, checkouts of 126 and 124 steered him to a 6-3 win and a place in the last 16.

Ratajski repeated that 6-3 scoreline in the next round, seeing off Joe Cullen, the most recent first-time European Tour winner. A mid-game 27 darter wrecked his chances of posting a big average, but his other five-winning legs were all in 15 darts or less, and included two more 100-plus finishes.

After a scrappy start against White in the quarters, Ratajski won three legs in a row, in 12, 15 and 12 darts, to go 5-2 up, before getting over the line in leg nine with a now all-too-familiar 6-3 scoreline – his third in as many games.

A first European Tour semi-final followed soon after against Gurney, and an increase in the format to the first to seven legs. It was here that Ratajski stepped up a gear to produce arguably his best-ever performance on a stage.

Chisnall, who had earlier wowed the Gibraltar crowd with a nine-dart finish in his quarter-final victory over James Wade, edged past Aspinall 7-6 in the other semi-final.

The stakes were raised again, but again Ratajski stood up to the task. Chisnall raced out the blocks, an 11-dart hold followed by a 117 out to break for 2-0. A 124 finish got Ratajski off the mark in leg three, and it would be the first of eight straight legs won by the first-time European Tour finalist.

Back-to-back 12 darters put Ratajski 6-2 up and, after Chisnall missed low at tops to stay alive, he found double 20 himself to run out an 8-2 winner. A 102.85 average, 8/14 on the doubles, and another marker laid down by Poland’s finest.

We roll into the final quarter of 2019 tomorrow, and Ratajski will be involved in a lot of the big events coming up over the next three months. Whether he has a big say in any of them remains to be seen, but a first PDC stage title will no doubt give more belief that the Polish Eagle’s rise has no plans of stopping just yet.