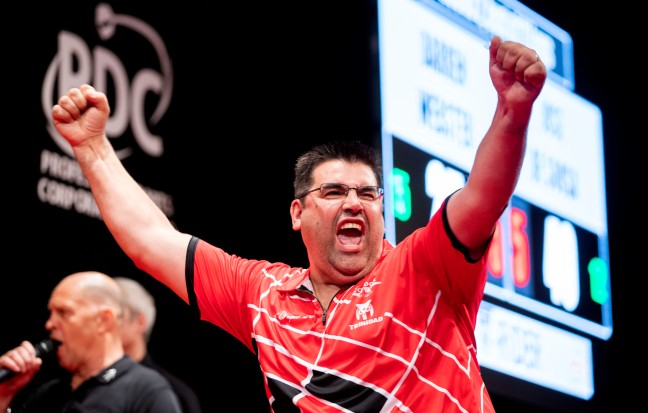 Jose De Sousa is the first Portuguese player to win a PDC event, after winning Players Championship 23 in Barnsley today.

The world number 79, who reached the final of Players Championship 18 in July, won a tour card for the first time through European Q-School in January.

The Lisbon-born thrower, 45, lost out to James Wade 8-5 on that occasion, but went one better today, breezing past world number seven Gerwyn Price 8-1 in the final to claim the £10,000 title at the Barnsley Metrodome.

The first Portuguese player to win a PDC title in his first year on the ProTour! pic.twitter.com/JkH6thK6pg

“This is a dream for me, I am so, so happy,” De Sousa said after beating Price in the decider.

“I have fought for 25 years to come here and at last I can do this. It’s amazing for me to play against the best players in the world and prove I can play just like them.

“This is an incentive for me to continue my work and I think I can beat everybody if I continue to play this way.”

De Sousa, who made his PDC World Championship debut back in 2012, made his return to Alexandra Palace in December last year, after winning through the South and West Europe Qualifier. He was beaten 3-2 by Michael Barnard in the first round.

De Sousa’s route to his maiden PDC title today began with a 102 average in a 6-4 win over Nathan Rafferty, before victories against Steve Beaton, Ryan Meikle and John Henderson sent the Portuguese number one into the quarter-finals.

A 6-5 win over Jermaine Wattimena, followed by a convincing 7-3 victory against Peter Wright, took De Sousa into his second PDC final, where he averaged 95, to Price’s 84, and won 8-1 to land his first title.

Jose de Sousa's first PDC title draws him into the competition for the final ProTour spot to the World Grand Prix with just 4 events to go before the cut-off. pic.twitter.com/GZqt567eGh