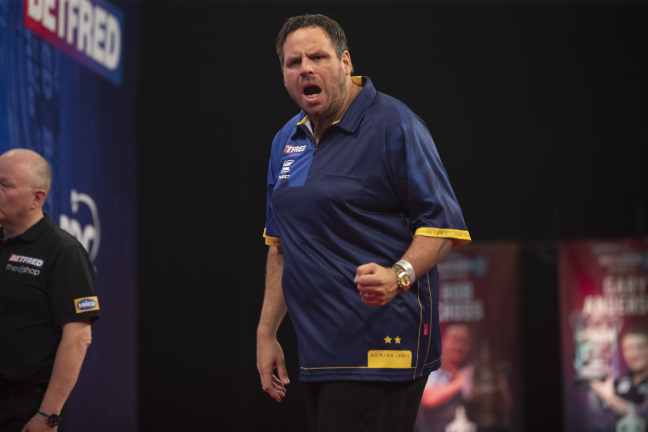 “I thought to myself before I started the tournament, ‘this could be my last Matchplay, unless I start knuckling down.'”

It was an eye-catching revelation from Adrian Lewis, moments after beating Steve Beaton 11-9 in the first round of the World Matchplay, on Monday night.

Lewis has hit heights in his career that very few can match. Back-to-back world titles in 2011 and 2012, along with several other major titles, but it has been a long time since he tasted the lost of those successes on the big stage.

Still only 35, and when you think of the longevity darts can boast compared to other sports, Lewis’ career at the highest level should have many more years to run. Yet, over the last few years his long-time standing as one of the world’s best has disappeared.

Take the World Matchplay, the tournament currently going on behind-closed-doors in Milton Keynes this week, and the one in which Lewis snapped up the last remaining berth in the quarter-finals late last night.

This is Lewis’ 16th consecutive appearance in the PDC’s second biggest ranking event, only behind the World Championship. It is an active run which is bettered by Steve Beaton (20 appearances) and no one else.

Lewis arrived at the Winter Gardens, in Blackpool, in the summer of 2005 as a fresh-faced 20-year-old for his debut, as an unseeded player, and since then has been a seed for all of the 15 editions that have followed.

From 2011-2017 he was a top-four seed, before the decline in his game saw him drop to the 16th seed for the last two years, and then 14th for this week. Such has been the long gap since his last ranking major win, the 2014 UK Open, Lewis was priced as a 100/1 shot by tournament sponsors Betfred to lift the trophy this weekend.

But, as we enter the final four days, and with only eight players left standing, Lewis’ odds have been slashed to 9/1, and the joint-fifth favourite alongside his quarter-final opponent tomorrow, Dimitri Van den Bergh.

Now, that is partly down to the number of big seeds that have fallen by the wayside in the opening two hurdles. Third seed Gerwyn Price and fourth seed Rob Cross, the defending champion, both departed in round one, while top seed Michael van Gerwen and second seed Peter Wright, the reigning world champion, were knocked out over the last two nights.

It is a tournament which has been blown wide open. Gary Anderson, the 2018 winner, is the only player left to have won the World Matchplay. And aside from Lewis and van Gerwen’s conqueror Simon Whitlock, the other five left are chasing their maiden PDC ranking title on TV.

Lewis has to fancy his chances. And his two performances so far should give him confidence. A 97 average in round one, followed by a 99 average in round two, both equating to his two highest averages on TV since December 2018.

Neither performance has been completely note perfect, but after two games Lewis is hitting doubles at around 50 per cent for the tournament, and when you add together 140+ and 180 scores, only Michael Smith, from the players left in the tournament, has hit more than Lewis (44 to 42).

You get the feeling that Lewis has a few more gears in him and, if he can find them during the rest of this week, we could well see him holding aloft a major trophy once again.