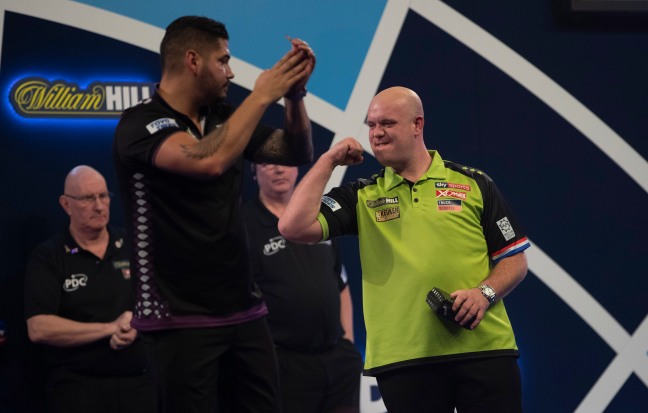 For the first time in 20 matches on the Alexandra Palace stage, Michael van Gerwen did not finish with an average in three figures.

The world number one rallied from a set down to beat his arch rival Jelle Klaasen 3-1 on the opening night of the 2020 PDC World Championship last night.

The rivalry between the two Dutch world champions is one that was born away from the oche, and does not need delving into here, but van Gerwen clearly dislikes Klaasen, which was evident with no pre or post-match handshake between the pair on stage.

The two had met 25 times previously in competition, with van Gerwen winning all of the last 12 occasions, the most recent on the European Tour more than two years ago.

Klaasen’s last victory over the defending world champion was way back in February 2014, and the pre-match odds reflected van Gerwen’s dominance.

Klaasen, now outside the world’s top 32, and at risk of dropping out of the top 50, was as high as 8/1 to cause an opening-night upset, and he made the perfect start by taking the first set.

The 2006 BDO world champion had what many viewed as one advantage, in that he had already played a game on the Alexandra Palace stage earlier, coming from a set down to beat Northern Ireland’s Kevin Burness in the first game of the tournament.

Van Gerwen punished missed doubles in the first two legs to go 2-0 up, but Klaasen responded with a run of legs in 14, 12 and 15, shutting out the top seed and denying him even a shot at a checkout to win the opening set.

At the first break, van Gerwen was averaging less than 86, while Klaasen was close to the 100 mark. A pair of 17 darters handed Klaasen a 2-1 lead in the next set, and he then threw first in the fourth leg, but it was at this point an off colour van Gerwen started to flex his muscles.

Klaasen, on 136, left tops after 15 darts, but the previous turn had seen van Gerwen produce a fine set up shot, a 138 to leave the same target, which he pinned first dart to break straight back. A 170 finish, for a 12 darter, in the decider, with Klaasen back on 200, levelled the contest.

A botched effort at 65 denied Klaasen a shot to go 2-0 up in the third set, van Gerwen levelled and then followed up with a 180 and a 130 checkout in successive turns, with Klaasen sat on 44, before another excellent set up, a 140 to leave 32, led to a 13 darter for the world number one to close out the third set.

The tide had turned. Van Gerwen, albeit not firing at all cylinders, was producing the right shots at the right times, as he so often proclaims after victories. A 12-dart hold, punctuated with an 88 finish on the bull, handed him the fourth set 3-1 and a place in the last 32.

While van Gerwen and Klaasen have met many times over the years, last night’s clash was arguably the highest-profile encounter yet. It was a highly-emotional game for the defending world champion, but he has come through it and, while it was not quite another ton-plus average to keep that particular streak alive, he can now focus purely on the rest of his title defence.