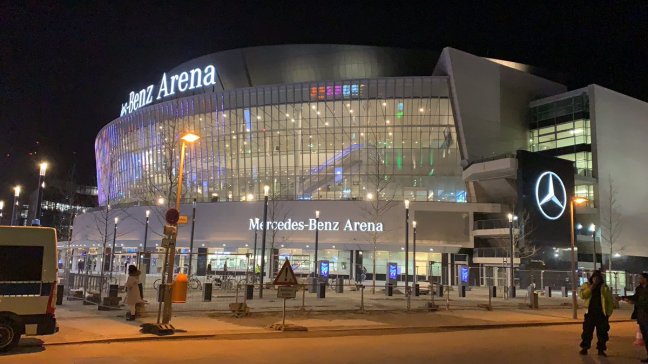 The Premier League roadshow rolls into Berlin this week and to the impressive Mercedes-Benz Arena. The battle to finish top and to qualify for the play-offs should intensify further after Judgement Night, but at the other end of the table, these next two weeks are pivotal for a legend sitting at the bottom of the pile.

Raymond van Barneveld has just two points to show from his first six games in this year’s Premier League, this his last ever Premier League campaign, which his beloved ‘Barney Army’ will fear could be cut short following the Rotterdam double-header next week.

The five-time world champion has some work to do if he is to extend his farewell tour in the Premier League by another seven nights. With three guaranteed games left, the Dutchman occupies the sole elimination spot and is three points adrift of Daryl Gurney, in eighth, and Michael Smith, in seventh.

It is a position which van Barneveld has been in since the end of Night 4, in Exeter, and that 7-4 reverse to Smith which triggered a run of three consecutive defeats. Pitted against his World Cup team mate, the world number one Michael van Gerwen, on Judgement Night next week, the cards look stacked against Barney.

Quite simply, Barney needs points and he needs them now. He does not want to go into that game with MVG needing a result to avoid elimination. That is a scenario which, yes, he is capable of conquering, but on the current trajectory is unlikely.

So, van Barneveld has two games before that all-Dutch showdown in Rotterdam a week on Thursday. He will face the aforementioned Gurney the previous day, on the first night of the double-header, but before then it’s Berlin and a meeting with the home favourite Max Hopp this week.

Hopp is the latest contender to get a taste of the Premier League behemoth, and in front of his own crowd, which makes Barney’s task all the more difficult. Hopp, at 22, is at the other end of his career, and 2018 was a year with fond memories, including maiden European Tour and Players Championship titles, as well as a run to the semi-finals of the European Championship.

Results-wise so far in 2019, the German number one has yet to catch the eye. But from his 15 games played so far this season, 12 of them he has averaged over the 95 mark, which suggests that he is playing to a very good standard. Play near that mark on Thursday and Hopp will fancy his chances of claiming a first win for the contenders.

Van Barneveld gave the ‘Barney Army’ a glimmer of hope this past weekend that he could pull off the great escape and avoid elimination from the Premier League. On Sunday, he reached the final of Players Championship 8, and on the way recorded back-to-back 100+ averages, the first time he has achieved that feat in more than a year.

Van Barneveld still has the game, it’s just getting it out, which has proven to be his downfall in this Premier League so far. One big performance in Berlin to upset the home crowd could just be the spark which sets Barney on a late surge to avoiding elimination in his final Premier League season.